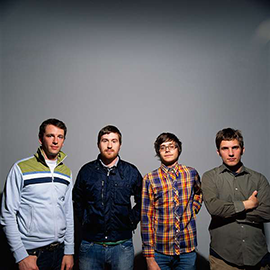 Cold War Kids started in 2004 in downtown Fullerton in guitarist/vocalist Jonnie Russell’s apartment above a restaurant called Mulberry Street, whose name they would eventually use as the title of their first EP. The band relocated to Whittier, California and began recording their first demos, which Monarchy Music released as the Mulberry Street EP in spring 2005. Between tours, the band released two more EPs: With Our Wallets Full and Up in Rags, in 2006. In summer 2006, Cold War Kids signed to Downtown Records and released their debut LP Robbers & Cowards that fall.

After two years of non-stop worldwide touring and an eventual relocation to Long Beach, California, Cold War Kids went back into the studio spring 2008 with the producer of their first record, Kevin Augunas. Nathan described the record making process: “Throughout the record making process, we would write songs in our own little practice studio, then we’d go into the studio for, like, two days and record three or four songs, then go back into our own practice studio for, like, a few weeks. So really it was over the span of four months or something. Actual studio days probably like 15 days. We don’t love being in a studio; we focus more on the writing.”

The band’s second album, Loyalty to Loyalty, represented a departure from its debut, featuring a lot of narrative storytelling, as well as political and philosophical references. In an interview with Blackbox Magazine, Nathan described the record as “being a little darker than the first.” “The title, ‘Loyalty to Loyalty,’ comes from the philosopher Josiah Royce. He said people need to live in community with each other, and he was reacting to Nietzsche, who came before him, saying people need to rise above—you need to be the strongest individual you can and rise above the masses. But this guy Josiah Royce is saying that you need to not rise above the masses, that you need to embrace your community. His paper was called ‘Loyalty to Loyalty.’”

The band spent the end of 2008 and most of 2009 on the road touring the album, highlighted by a national tour with Death Cab for Cutie. In between touring, the band returned to the studio to record what would become the Behave Yourself EP. Willett described the album: “These 4 songs were recorded sometime between “Loyalty” sessions and now. They didn’t belong there, but they kept hanging around, starting trouble, made friends and insisted their story be heard.” Like their most recent releases, Behave Yourself was released on Downtown Records.

The band went back into the studio in February 2010. Nathan, when speaking to Filter Magazine, said, “Album three is in the works now. We are working with a producer named Jacquire King. He has a sweet and eclectic roster of Modest Mouse, the last Norah Jones record, Tom Waits’ Mule Variations, the last Kings of Leon record…So, he is going to work miracles with us. All of our music has always been written entirely by us, without any influence, so to have him step in and help us with the direction is tremendous. I was just watching the Wilco Documentary again, and I think that in many ways Wilco is to country/Americana as Cold War Kids is to soul/punk. We are taking what we do to the next level on this record. The EP is the final reminder of the good old days of quick and fun, minimal Cold War Kids recording.”

On January 15, 2013 the band announced a new single, “Miracle Mile”, for their fourth album, Dear Miss Lonelyhearts. The latter was released on April 2, 2013.