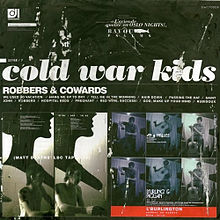 Robbers & Cowards is the debut album by indie rock band Cold War Kids. It was released in 2006 on Downtown Records, and contains the single “Hang Me Up to Dry,” which received airplay on both XM Satellite Radio and Sirius Satellite Radio in the USA, CJZN-FM in Victoria, BC, Canada, on BBC Radio 1 and XFM in the UK, and on Triple J in Australia.